I always had a hard time remembering what was CI’d and what wasn’t. Positioning, heat, which blood pressure numbers were too high?

Many of these CI’s were based on massage increasing circulation, making it too hard on the heart when blood pressure was already too high.

But what about now that we know that massage doesn’t increase circulation and move fluids around like we once thought?

Are these things still a contraindication?

And do we really need to take every patients blood pressure before treatment?

Do We Really Need To Take Blood Pressure?

Part of the problem with hypertension is that it quite often goes unrecognized.

It has been called the “silent killer” because of the damage it can cause to the blood vessels, heart, brain and kidneys before any other noticed symptoms occur.

Where we need to pay attention is the degree of hypertension the person is experiencing.

Looking back over my notes from college, we were told that 160/95 was contraindicated for a massage. This is probably true in the case of someone who doesn’t know they have hypertension and should see a doctor. If they are under the care of their doctor, they’re probably coming to see you for help with this very thing.

Which leads us to why we should be taking a patients blood pressure in the first place.

One paper examined the role of manual therapists taking blood pressure prior to treatments as an aid to their clinical reasoning, risk assessment, and vascular profiling. The paper presents three case studies where patients were having either neurological or musculoskeletal pain in the neck and/or thoracic chest area.

In each case blood pressure was taken, two of the cases were abnormally high, and one was low. Once the patients were referred out to appropriate care and the issues causing the rise or drop in BP was corrected, the issues they were experiencing decreased and manual therapy could continue.  The only way these issues would have ever been recognized was by the manual therapist taking blood pressure readings as part of their treatment protocols.

Also important is another study which showed a difference in blood pressure measurement depending on the position the patient was in. Systolic blood pressure decreased in semi-fowlers and sitting positions compared to being taken when the patient was supine. This stressed the importance of making sure measurements were being taken with the patient in the same position before and after treatment to get a true reading on whether therapy was effective.

If you took the initial measurement when the patient was sitting before the treatment started, then took a second measurement at the end of the treatment while they were laying on your table, your comparison before and after treatment wouldn’t be accurate.

So even if you think the patient you’re treating doesn’t fit the profile of someone who would be dealing with high blood pressure, it should still be part of your routine, especially if it’s the first time you’re seeing someone. 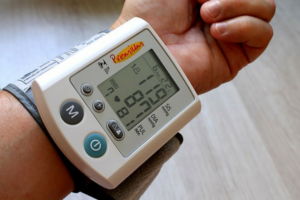 As we have discussed on this blog before about massage and circulation, many of the contraindications we learned in school probably aren’t as applicable anymore.

We were also told that positioning of the patient on the table could be a concern as well, we were instructed to not leave the person in the prone position for extended periods. Looking back through the textbooks and notes as I wrote this article, there was some good advice from one of the texts, the gist was that if the person could sleep in this position (eight hours sleeping compared to an hour on your table), they’re probably fine. Keeping communication open with that patient would be important, to see if they start feeling dizzy, or lightheaded during the treatment, but otherwise, you’re probably safe.

One study showed that just lying prone can actually help decrease blood pressure just as much as lying prone with a massage (however this study was done on healthy people and those with hypertension were excluded from the study).

Another systematic review(1) showed that massage therapy combined with antihypertensive drugs was more effective than just using the drugs alone. While researching for this, I found several articles and studies that show massage therapy to be an effective complimentary treatment for hypertension.

So with all this evidence, it’s safe to say there is a lot we can do to help patients with hypertension. Keeping in mind a few different things, like when pressure is high enough to dictate an emergency, communication with your patient and knowing that a regular length stroke is okay, there shouldn’t be too many issues with your treatment. As we continue to try and gain respect as healthcare professionals, this is one easy step we can use to add to our clinical reasoning and risk assessments when dealing with our patients. If one of your patients is coming in for this specifically, take their blood pressure before and after the treatment (with them in the same position), so you can prove what you are doing is helping them, and communicate that information with their family doctor as well. I guess I’ll have to go buy one of those digital blood pressure cuffs now, they’re probably more accurate and less of a chance I’ll screw it up when using it.